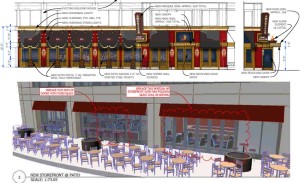 American Tap Room, which will be taking the place of the now-shuttered Sette Bello Italian restaurant at 3101 Wilson Boulevard in Clarendon, is asking the county board to approve an outdoor cafe and new signage along North Highland Street.

The board will consider the proposed site plan amendment at its meeting on Saturday. County staff is recommending the changes be approved.

American Tap Room is proposing a sizable outdoor cafe with three fire pits and seating for about 75 people, according to architectural drawings.

The cafe, though large, would still allow an 8.5 foot passage between the patio and the sidewalk tree pits. County regulations require a minimum 6 foot passage.

Instead of one large sign across the long facade, American Tap Room is requesting a blade sign, an entry sign and several low-key awning graphics. The entrance would also feature a firebowl, like the type that graces the front of Matchbox restaurant in D.C.’s Chinatown.

In November, an American Tap Room employee told us the restaurant would be “upscale comfort casual dining,” similar to its current Reston and Bethesda locations.