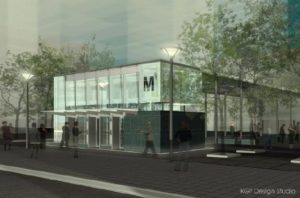 Arlington County is warning Rosslyn workers and residents to expect some blasting as a result of work on a new entrance to the Rosslyn Metro station.

According to an email from the county, contractor Clark Construction has excavated to a depth of 20 feet but is about to hit bedrock. Once it does, Clark will need to start blasting to reach the ultimate depth of 100 feet. The blasting is expected to start “in the near future.”

County officials say they’re doing everything they can to keep the noise down, including putting a concrete cap on the “blast shaft” and using “blast mats.”

“Blasting is often a standard practice for excavation and due to the small footprint of the work site, the contractor anticipates minimal noise and vibration,” the county said. “Close coordination has occurred with all partners on the construction project, including the Arlington County Fire Marshall, Police Department, Metro, and others.”

The actual time of day when blasting will occur and possible street closures are currently being worked out with the Fire Marshal’s office.