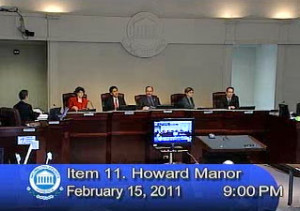 When county officials talk about the need for affordable housing, they often cite the example of such housing allowing school teachers to live in the communities they teach in.

Why, then, did three self-identified teachers have to stand up before the county board last night to say that the affordable housing project the board was considering would result in them being forced from their already-affordable apartments? And why did the board unanimously approve a $6.38 million loan for the project anyway?

The answer is complex, but the practical implication is that because as single teachers they make just above the income limit for affordable housing, the board’s vote last night will most likely result in them being forced to move — perhaps even out of the county.

The loan in question will be made to the non-profit Community Preservation for Development Corporation, which specializes in affordable housing projects in the Washington region. CPDC will use the money to buy the 76-unit Howard Manner garden apartments, located at 2506 North 20th Road, just north of Clarendon. It’s one of the only market rate affordable housing complexes in the area.

What prompted more than a half dozen current residents to speak out last night was CPDC’s plan to renovate the 63-year-old apartments, convert most of the efficiencies into two-bedroom units, and impose income restrictions on residents. 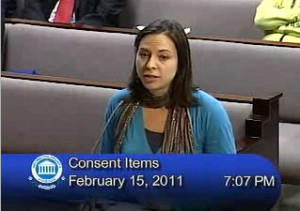 “Howard Manor already is affordable housing,” one woman said. “The only thing you would achieve… is putting a salary cap on those who can live there.”

Another woman said that as a single mother working two jobs, she would be making too much to stay in her apartment, for which she currently pays $870 per month.

“I really appreciate the efforts to preserve affordable housing, but this is already affordable housing,” said one self-identified teacher, who added that residents had only just heard about the renovation plan. “We felt blindsided and I felt betrayed.”

Despite residents’ pleas, the board said, essentially, that converting the current market-rate affordable housing units to dedicated affordable housing is the lesser of two evils. Should CPDC’s plan be denied, County Board Chairman Chris Zimmerman said, nothing would stop a developer from buying the property and building more expensive apartments. Development rights on the property would allow such a move without the board’s approval.

“The choice we have right now is to say no to [CPDC], then leave you at the mercy of the current owner who we know needs to sell,” Zimmerman told the residents who attended last night’s meeting. “I know that isn’t what you want to hear, but that’s essentially the choice you have.”

“I have watched year after year after year as one Howard Manor after another comes and goes,” Zimmerman said. “If I had any reason to believe these units would stay affordable, then I would have put the dollars somewhere else.”

With the loan in place, CPDC will move to purchase the property while, at the same time, applying for state tax credits that would finance the renovation portion of the plan. Once the purchase is complete, CPDC will start verifying the income of current residents.

There will be seven units set aside for people above the 60 percent Area Median Income cut-off. Long-time residents, disabled residents and families would have priority for those units, company officials told the board.

The new apartments would be priced between $899 and $1,386 per month, compared to between $790 and $1,360 per month now. The complex would remain affordable for up to 60 years, according to a county press release.

If CPDC receives its desired tax credits, renovations would begin in mid-2012. The company says it will pay for voluntary and involuntary moving expenses.

Despite expressing concern about the lack of notice given residents, board members unanimously approved the loan, which will be issued by the county’s Affordable Housing Investment Fund. The vote could not have waited, board members said, because CPDC’s deadline for applying for the tax credits is March 11.

“This is exactly the sort of housing we need for people who want not only to work in Arlington but also to live here,” Zimmerman said in a statement.