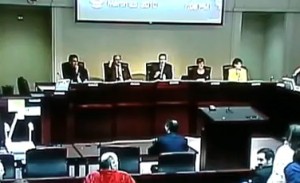 Despite County Manager Barbara Donnellan’s recommendation that the property tax rate be held steady, the county board voted last night to give itself the flexibility to raise the rate by a penny, if need be.

Last year, when the board set the property tax rate at 1.6 cents above Donnellan’s recommended figure, the advertised rate was 96.5 cents.

“Now that the County Manager has presented her proposal, in the next six weeks we will hear more from the public, and weigh the needs of the community,” County Board Chairman Chris Zimmerman said in a statement. “Our goal is to deliver a sustainable, balanced budget in April that spends tax dollars wisely, delivers core services efficiently and makes intelligent investments in the future.”

According to the county: “The Board also voted to advertise proposed fee changes including: an increase in the water/sewer rate; a decrease in the residential solid waste fee; an increase in parking meter rates; and fee increases in several parks and recreation areas such as preschool, summer camps, senior adult registration, facility rentals, farmers’ markets, and community gardens.”

The final county budget and tax rate will be adopted in April.

Kenmore Middle School’s student release has been delayed and the school has been placed in “secure the building” mode due to a possible security threat. Initial reports suggest that an…