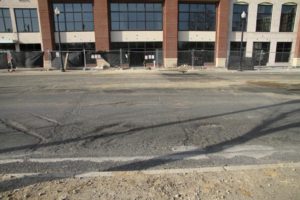 Construction crews are starting to wrap up work on the massive Penrose Square development on Columbia Pike. As the project nears completion, county officials are preparing to do some rehab work on the rough stretch of pavement in front of the development.

Penrose Square is now leasing its upscale apartment homes. The move-in date for tenants is set for mid-May. Billed as a “town square” for Columbia Pike, Penrose Square will feature about 300 apartments, a new, 47,000 square foot Giant supermarket, a handful of shops and a public park.

The construction of Penrose Square has required extensive utility work on the section of Columbia Pike in front of the development. As a result of the constant digging, the Pike has become rough and gravelly between South Wayne Street and South Barton Street.

The Penrose Project is in the final stages of the infrastructure upgrades and installations. All wet utilities have been installed and over 90 percent of the dry utilities, or undergrounding, has also been installed. We will begin to demolish and install new sidewalk, curb and gutter on Columbia Pike beginning Monday February 21st and we expect to begin the final paving the first week in April. In the meantime, staff will continue to monitor and restore the roadway to keep it safe for vehicular traffic. Hopefully, this will all be restored and looking better in the coming weeks ahead.