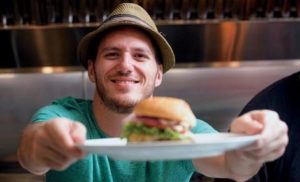 An ARLnow spy spotted Mendelsohn and a man identified as his father dining at the Crystal City Chick-fil-A while chatting up the manager about foot traffic and sales.

“He is apparently opening a new restaurant (or planning to) in Crystal City,” the tipster said. A second source confirmed that Mendelsohn may be scouting out locations in Crystal City.

Mendelsohn is the proprietor of Good Stuff Eatery, a gourmet burgers-fries-and-ice-cream joint on Capitol Hill, and We, the Pizza, which is exactly what you think it is.

Good Stuff Eatery is in the midst of an expansion that is bringing it to new locales like Baltimore and Philadelphia. Might Crystal City be next?