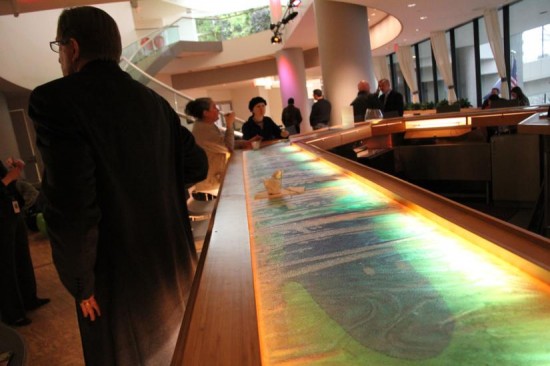 A jazz band performed as guests sampled mini versions of some of the sandwiches Here will be serving when it opens to the public on Tuesday. Here’s how Here is being described in promotional literature:

Open the same hours as Artisphere, Here promises to be a modern and exciting addition to Rosslyn’s daytime dining, happy hour and nightlife scene. Its menu will feature a seasonal menu of comfort food with Latin flavors made from locally-sourced and fresh ingredients. The restaurant will also offer delicious alternatives to the usual intermission concession items, including homemade guacamole, fire-roasted salsa and chips, and inventive recreations of American and Latin comfort food. Artisphere’s focus on being a less formal arts space includes welcoming patrons to take a drink from the bar and wander through its galleries and performance venues.

Here’s tentative menu includes salads, sandwiches, burgers (including vegetarian), freshly-made pizzas, pasta, sides, charcuterie, cheeses and daily specials. The restaurant will have eight beers on tap, a wine list and a fully-stocked bar. Co-owner Rolando Juarez says he hopes Here becomes its own destination, rather than just a place people stop by while in Artisphere.

“We’re hoping to draw a crowd of our own who just want to come in to eat,” he said. Here will be open tomorrow night with a limited menu for an fully-booked, RSVP-only launch party. More photos after the jump.