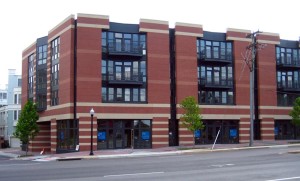 The long, strange trip for the project dubbed the Bromptons at Cherrydale may soon be coming to an end. The building at 3800 Lee Highway has been nearly seven years in the making, but condos there could go on sale before the start of summer.

Originally, all of the 22 condo units were under contract in 2004. But progress stalled in 2006, when the county issued a stop-work order due to the building being structurally unsound. The developer, Ed Peete Company was given the opportunity to remedy the issues or demolish the structure. After some waffling, Ed Peete chose demolition, but the deadline for that came and went in July 2008.

While this was being hashed out, the building sat vacant for years. A flurry of lawsuits followed, including those against contractors and engineers hired by Ed Peete. Ultimately the developer decided to keep the structure and reinforce it as part of a settlement reached in 2009. 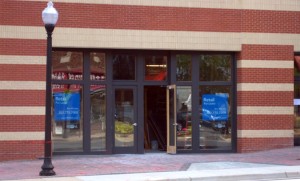 Now, passing by the site provides a view of work crews buzzing in and out of the building and signs advertising the first floor retail space. Gone are the flapping sheets of plastic and insulation on the façade, the torn-up sidewalk has been replaced, and balconies have been affixed to the front of the units.

Project Manager Neil Winsten with R15, formerly the Ed Peete Company, says many improvements have been made to comply with the county’s requests of fixing issues such as stressed beams and walls. He says steel beams and support slabs have been added for reinforcement. With the new additions, Winsten believes this should be “one of the strongest buildings around.”

Winsten says he hopes the building will be finished by the end of May. The 22 condos are set to go on sale immediately after completion. Winsten says they will start looking for tenants to fill the first floor retail space around the same time.

As far as working with the county for all these years, Winsten says it has “gone pretty smoothly once we put the new plan into effect.”

Neighbors have been grumbling for years about the Bromptons project being an eyesore and dragging down property values. In response to their frustration, Winsten says, “We’re just about done so thanks for bearing with us. We haven’t wanted it to take this long either.”