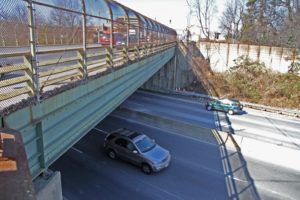 VDOT will be holding a meeting two weeks from now to tell residents about their $6 million plan to replace the crumbling Glebe Road Bridge over Route 50.

The agency says construction on the new bridge will begin this summer and will wrap up in fall 2012 — a bit later than originally anticipated. The entire 100-foot-long bridge deck will be replaced with pre-cast concrete panels, and will be 27 feet wider than the existing bridge. The extra width will be used to install a 10-foot wide sidewalk, a 17-foot wide shared-use path and a new northbound turn lane. There will also be new traffic signals, “decorative wrought-iron picket fencing” and LED lighting.

The agency says traffic impacts for Glebe Road drivers should be minimal, with virtually no impacts during the day and lane closures at night. There will, however, be “intermittent detours” on Route 50 beginning in August. Traffic will be diverted to George Mason Drive and Washington Boulevard during the detours, which will be announced in advanced.

The Glebe Road bridge over Route 50 carries about 35,000 vehicles a day, according to VDOT. There have been several reported incidents of concrete chunks falling from the bridge over the past two years.