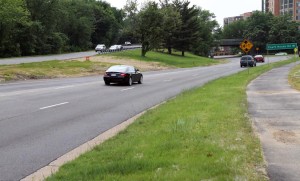 The lefthand lane on westbound Route 50 near the Courthouse Road exit has finally reopened, after more than a year of utility work.

The lane closure lasted about 10 months longer than originally anticipated. The utility work was performed in preparation for VDOT’s Courthouse interchange project, which is expected to get underway this month.

A tipster says the jersey walls separating the two righthand lanes of westbound Route 50 from the newly-paved lefthand lane were removed during the day on Friday.