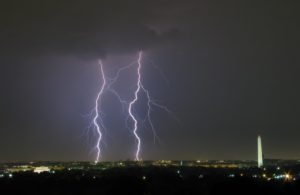 Thunderstorms rumbled through the region tonight and knocked out power to parts of Arlington.

As of 2:30 a.m., 1,734 Dominion customers were without power in Arlington. The outage was said to be centered in the Courthouse and Clarendon area, along Wilson and Clarendon Boulevards.

In addition to restaurants and commercial offices, the outage also hit county government buildings in Courthouse. Some of the county’s internal computer networks were said to have been knocked offline by the outage. Firefighters responded to the county jail after the emergency generator reportedly failed to start, leaving the facility in the dark.

Dominion’s web site estimates that power will be restored no later than 7:00 a.m.