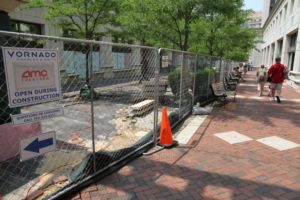 Work on the brick pavers at Courthouse Plaza appears to be behind schedule.

We’re told by a source that the project will most likely not be completed this month, the anticipated completion date that TBD.com reported in February. No official word yet on how much longer the project might take. Multiple calls seeking information from the owner of Courthouse Plaza, Vornado Charles E. Smith, have gone unreturned over the past week.

Courthouse Plaza is the home of restaurants, small shops, a movie theater, a hotel, county government’s main office building and a Courthouse Metro entrance. The project has resulted in a gauntlet of fences around the plaza, and the displacement of some outdoor seating, but access to businesses and Metro has been maintained.

Currently, workers are using pools of water to test the sealant used underneath the brick pavers. The pavers themselves — which, we’re told, only arrived recently after a significant delay — are stacked near the county government building, awaiting installation.