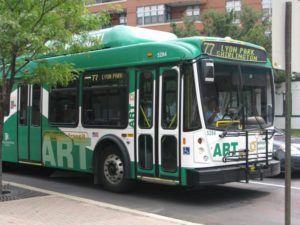 Update at 4:15 p.m. — All evening ART routes are in operation tonight except the 61B. However, many routes will operate less frequently than usual. See the ART web site for more information. Arlington officials say that about 23 bus drivers did not report to work today.

Update at 8:45 a.m. — We’re told via Twitter and email that drivers are striking near the Courthouse Metro station.

Arlington Transit bus riders are being told to “expect delays on all routes” this morning.

The agency says the delays are “due to circumstances beyond our control.” ARLnow.com hears that bus drivers have called in sick en masse due to a labor dispute.

ART is also advising that the 61B bus is not in service, and that riders should use the 61A instead.

The Sun Gazette reported over the weekend that the County Board discussed “management-labor issues with the contractor that runs the Arlington Transit (ART) bus service.” Sun Gazette editor Scott McCaffrey described the discussion as a “pander-a-thon” in favor of the bus drivers, who are paid less than their counterparts at Metro.