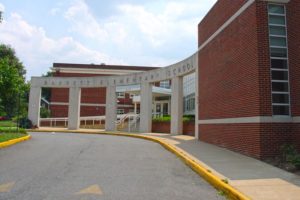 Last night’s storms did more than just knock out the power to thousands of Arlington residents, leaving homes, businesses and traffic lights dark (especially in the Ballston area).

The storms — and the resulting power outages and surges — apparently played a role in knocking out Barrett Elementary School’s air conditioning. In a letter to parents, Barrett principal Theresa Bratt says that the school’s chiller unit “completely broke down this morning” and is “beyond repair.”

The school has deployed 30 fans to keep classrooms cool while they await the arrival of a temporary rental chiller.

“Fortunately, the cooler weather, combined with the fans and the operable windows throughout the school have aided efforts to keep the building as comfortable as possible for our students and staff,” Bratt wrote. “A permanent replacement chiller has been ordered and will be delivered in about eight weeks, and we expect to have the problem resolved permanently by mid- August.”

Parents with concerns about the lack of air conditioning are encouraged to call the school. Barrett is located just south of Ballston at 4401 N. Henderson Road.