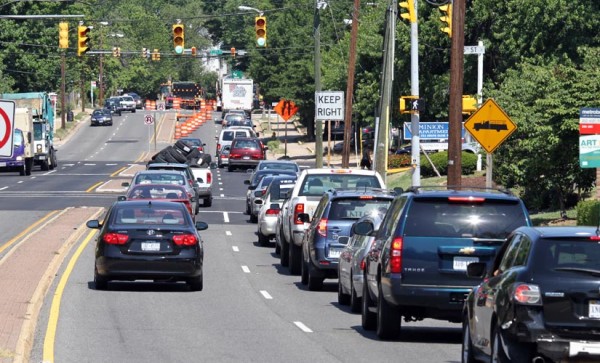 Drivers heading across the Glebe Road/Route 50 bridge are now encountering lane closures and heavier traffic during the day.

The bridge that carries Glebe Road traffic over Route 50 is being replaced over the next 15 months. Initially, we had been told that “any lane closures or shifts… will occur between 9:00 p.m. and 5:00 a.m.” and that there would be “no major construction impacts… during the day.”

The lane closures, construction activity and traffic backups we saw on either side of the bridge today seem to dispute those initial statements.

Update at 11:50 a.m. — We’re hearing on Twitter that VDOT told attendees at a public meeting that the work underway now — removing the medians leading to the bridge — would possibly take place during the day.