Tonight county representatives will present the results of a week-long public planning and design process intended to help plan the future of Columbia Pike.

The “Work in Progress Presentation” will be held from 7:00 to 9:00 tonight at the Sheraton National Hotel (900 S. Orme Street). Planners will reveal the work that has been completed through a neighborhood planning day  — or “charrette” — last weekend and a series of “open design studios” during the week.

The process was designed to allow residents to participate in the planning of the on-going Columbia Pike corridor revitalization. 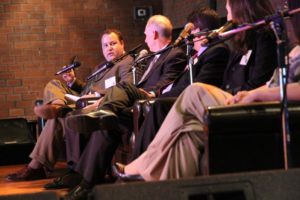 Earlier this month, a panel organized by the Columbia Pike Revitalization Organization gave a preview of what the future of Columbia Pike’s development might look like.

Panelists suggested that real estate investors are currently most interested in buying older, fully-leased apartment complexes on the Pike, renovating them and re-leasing for considerably higher rents. If there is new construction on the Pike in the current real estate climate, it will likely be limited to townhouses and 4-5 story wood frame apartment/condo buildings, they said.

Consultants who are advising Arlington County on ways to preserve affordable housing on Columbia Pike said that the county should eliminate the zoning that currently allows developers to convert garden-style apartments on the Pike to condos without County Board approval. They said that much higher density — 70-80 units per acre, compared to the current 25 unit per acre average — is required to support affordable housing.

As for the development of retail along the Pike, panelists said that interest from retailers and restaurants is increasing, but cautioned that more daytime activity is needed to support certain larger, desirable businesses. The addition of more office space along the Pike — possibly offices for defense contractors — could generate “more excitement” among businesses, panelists said, adding that hotels could also help generate daytime activity.

Panelists said that the completion of the Columbia Pike streetcar will result in “a further boom of development on the Pike.” Later in the presentation, Arlington Transit Bureau Chief Stephen Del Giudice revealed that he hopes to start the “design and delivery” phase of the streetcar project “by this time next year.”

Disclosure: CPRO is an ARLnow.com advertiser.