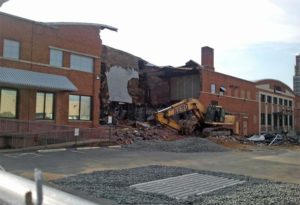 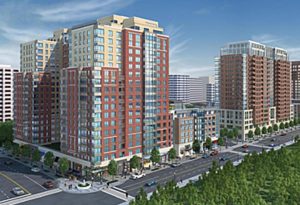 Demolition is underway on a block of empty warehouses on S. Fern Street in Pentagon City.

The warehouses, which used to house a DHL distribution office and a Danker furniture store, are being torn down to make way for a new 18-story apartment building called Three Metropolitan Park. The building will be the third in the Metropolitan Park development, across from Costco.

According to the county’s planning division web site, Three Metropolitan Park will consist of 411 apartments and 16,345 square feet of ground floor retail space, one block from the Pentagon City Metro station. The building will be 18 stories — or 202 feet — tall and will have 502 parking spaces.

The Washington Business Journal reports that the apartment building is expected to start renting by the beginning of 2014 at a construction cost of at least $160 million.