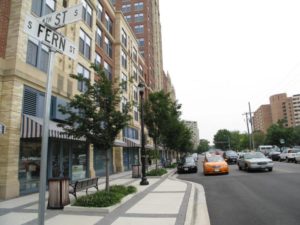 It used to be a sleepy street full of warehouses and warehouse stores. Now the three blocks of Fern Street between 12th and 15th Streets are starting to come to life thanks to high-end apartments and a growing roster of ground-level retailers.

The block’s main attractions at this point are the Costco on the north side of the street and the Gramercy and Millennium at Metropolitan Park luxury apartment buildings on the south side. The relatively recent addition of a Dunkin’ Donuts has helped the block attract some more lunch and breakfast foot traffic — adding to the brave souls who patronize an old greasy spoon called Nell’s Carry Out, which resides in a trailer across from the old DHL warehouse.

Slowly but surely, though, more retail is arriving. A dry cleaner and a bank moved into retail bays at the Gramercy around the same time as Dunkin’ Donuts. A UPS Store is under construction down the block. And the U.S. Post Office that’s currently on Eads Street will eventually be moving to the ground floor of the Millennium.

There’s plenty more space to fill. One retail bay of special interest is a specially-designated restaurant space in the Millennium. The building’s leasing agent has been entertaining nibbles from some restaurateurs. We hear that Lost Dog Cafe has expressed interest, as has an Italian restaurant, identity unknown.

A half block off Fern Street is a privately-constructed park with lots of potential. The neatly-landscaped open space — courtesy of Kettler, the developer behind the Gramercy and the Millennium — is big enough to be much more than the defacto dog toilet that it currently serves as. In June, Kettler used it for a party that included “live music, local vendors, a tricycle race, food, drink and a variety of fun activities.” Next summer, management tells us, it will host a series of outdoor concerts.

In the longer term, there may be even more retail space in need of tenants. That’s because Kettler is only a quarter of the way through its planned Metropolitan Park development. Six more buildings are expected to be built by 2025, for a total of 3,200 apartments and/or condos. Given the red-hot Pentagon City housing market, and the fact that the Millennium managed to surpass the 80 percent occupied mark just six months after opening its doors, it’s probably a safe bet that the development will continue despite the struggling economy.

For a place that’s still surrounded by warehouses and the occasional instance of gang graffiti, the Kettler apartments on Fern Street sure are pricey. The smallest studios at the Millennium start at $1,510 per month.