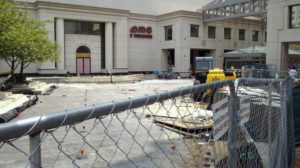 Two months ago we reported that the brick work that has turned Courthouse Plaza into a maze of fences was behind schedule.

On the surface, it doesn’t appear that much progress has been made on the project since then. We spotted a small construction crew working on the big patch of bare ground in front of the AMC movie theater and the county government building yesterday afternoon, but it’s not clear what exactly they were doing.

Residents, needless to say, aren’t happy with the state of affairs.

“I live in Courthouse Plaza and walk through the disaster area every morning. I avoid it at all other times,” one resident wrote, in an email to ARLnow.com. “Why[is it] taking so long to just do half the plaza? Last week they ripped up an additional section — the walkway connecting the west end of the plaza to 14th Street — so apparently the project isn’t abandoned. However, there seems to be ZERO progress on any other part of the site.”

We reached out to Vornado, the owner of Courthouse Plaza, but haven’t heard back.