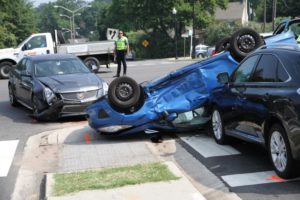 Arlington may be the safest city in the U.S. when it comes to traffic fatalities, but we’re also some of the most accident-prone drivers in the country, according to new data from Allstate Insurance. The good news: we’re less accident-prone than drivers in Alexandria, Baltimore and the District.

Arlington ranks 180 out of 193 cities in Allstate’s “Best Driver” rankings. That’s a downgrade compared to last year, when Arlington drivers ranked 174th. According to the latest data, drivers in Arlington go an average of 6.8 years between accidents.

By comparison, drivers in the safest city on the list — Fort Collins, Colo. — go an average of 14 years between accidents.

The District ranked dead last on the list, at 193rd, thanks to an average of only 4.8 years between accidents. Baltimore was the second worst, at 192nd. Alexandria ranked 184th.

Next
Construction Underway at Zoë’s Kitchen in Ballston