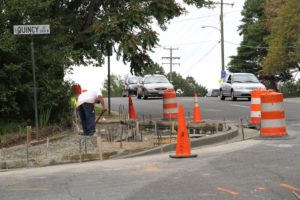 Crews are making progress on safety improvements to a steep portion of Walter Reed Drive. Currently, most of the construction is closer to S. Pollard Street, near the top of the hill, but changes will soon stretch down to Four Mile Run Drive.

Some curb extensions, which are being added at the intersections of Quincy, Quebec and Pollard Streets, have already been poured. Drivers in the area can eventually expect to see planted medians where only painted medians previously existed. Also, the right-hand turn lane onto the Four Mile Run Drive access road will be eliminated for drivers heading downhill on Walter Reed, in favor of traffic turning onto the road at the 90 degree intersection.

Several of the improvements are designed to slow down traffic, while others are intended to protect pedestrians. The construction covers the area, long considered dangerous, where a bicyclist was killed in May.  Many cyclists use this stretch to travel to and from the W&OD Trail and Four Mile Run.

Other pedestrian safety improvements have recently been made on Shirlington Road and Arlington Ridge Road, also in South Arlington, and improvements are planned for a stretch of Glebe Road near Ballston.

Road work on Walter Reed could last up to two months.