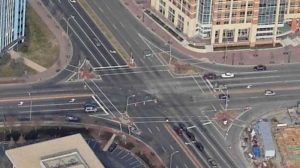 Arlington County is planning improvements designed to make three N. Glebe Road intersections safer for pedestrians. The improvements are expected to be implemented by the end of next year.

The intersections — Glebe and Carlin Springs Road, Glebe and Wilson Boulevard, and Glebe and Fairfax Drive — involve long crosswalks across numerous lanes of fast-moving traffic, as well as the occasional slip lane. The improvements are intended to make crossing the intersections safer by reducing crosswalk distances and “conflict points.” 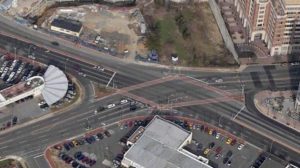 At Glebe and Wilson, the plan is to eliminate and square up the existing slip lane at the southwest corner of the intersection, as well as to widen the median refuge, reduce crosswalk distances and to install a speed table on the northwest slip lane.

At Glebe and Carlin Springs, intersection corners will be rebuilt, median refuges will be enhanced, higher-visibility crosswalks will be installed and the driveway to and from the Ballston parking garage will be modified for safety. 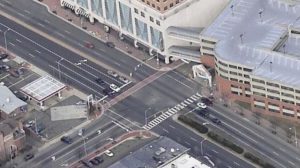 The changes are being paid for primarily with federal funds, according to Arlington County Director of Transportation Dennis Leach. Even though Glebe Road is a state route, Virginia is not chipping in for the changes.

“They view this as an Arlington-requested betterment,” Leach said.

Leach expects bids for the project to come in this fall, with construction to start in the spring and to wrap up by the end of next year.