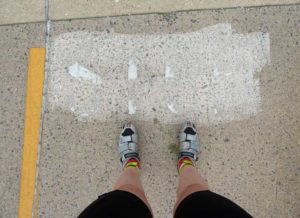 Two painted “stop” markers have been removed from the bike trail that runs along the north side of Lee Highway, at the dangerous intersection with Lynn Street in Rosslyn.

The markings were removed from the Custis Trail by Arlington’s Transportation Engineering and Operations Administration last week, according to spokeswoman Shannon Whalen McDaniel. On Friday, ARLnow.com reported that a cyclist struck and injured at the intersection last month said he was issued a warning for failing to stop at the marker.

“The markings were removed because they provided a restriction to bicyclists that conflicted with the traffic signal at this intersection,” Whalen McDaniel said today. “This was recommended as part of a comprehensive trail traffic control study over a year ago. All users of the streets and sidewalks should exercise care at intersections and obey all regulations, signals, and signage.”