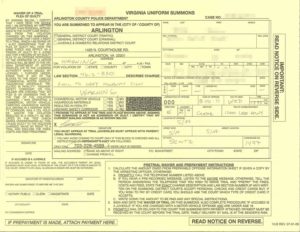 A cyclist who collided with a vehicle last month at the dangerous intersection of Lee Highway and N. Lynn Street was issued a police warning, while still in his hospital bed, for failing to “obey a highway sign.”

The accident happened on the afternoon of Wednesday, Aug. 10. The cyclist said he was heading eastbound on the Custis Trail, crossing Lynn Street in Rosslyn with the green light, when a car quickly turned in front of him as he was traveling across the intersection. He slammed on the brakes but still hit the vehicle’s rear driver’s side quarter panel.

The cyclist, who did not want to be named, said that police followed his ambulance to the hospital, asked him to write a written statement, and then handed him a warning as soon as he had finished the statement. The warning was for failing to “obey a highway sign.” 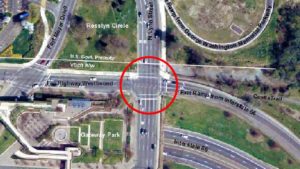 As explained to the cyclist, he was culpable in the accident because he did not stop at a painted “stop” sign on the sidewalk just before the intersection. Further, he was considered a “cyclist” while on the trail, but became a “vehicle” when he entered the intersection, and thus did not have the right-of-way to oncoming traffic.

“You just can’t tell me that it’s all my fault for being hit,” the cyclist told ARLnow.com. “Naturally, if you’re a cyclist heading into an intersection, you’re not concerned with what’s below you but with what’s in front of you.”

The cyclist says he later found out that the driver who turned in front of him was not issued any sort of citation. As a result, not only will he be financially responsible for his own bills — the hospital bill for his hand, arm and shoulder injuries, plus the replacement cost of the $2,000 carbon fiber bike — but he may be held responsible for damage to the driver’s vehicle.

“That leaves me holding the bag. I have no recourse whatsoever,” he said. “Drivers have carte blanche.”

His situation is not unique in the area. The Falls Church News-Press reported over the weekend that a cyclist who was struck by a car and injured at the intersection of Great Falls Street and the W&OD Trail was charged for “disregarding a stop sign,” despite the fact that there were once signs at the intersections stating that bike trail users had the right-of-way.

As for the cyclist struck in Rosslyn, he says he’s now writing to county officials to try to lobby for some short- and long-term solutions for making the Lee/Lynn intersection safer for trail users.

“I go through it all the time and it is a very dangerous intersection,” he said. “Bicyclists take their lives into their own hands when crossing crosswalks.”