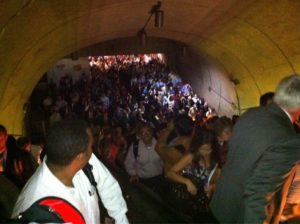 (Updated at 7:35 p.m.) A massive emergency response converged on the Rosslyn Metro station around 6:30 tonight after medical emergencies related to overcrowded conditions were reported.

The station was packed with passengers after Orange Line trains were halted for a person struck by a train at the Clarendon Metro station. Firefighters at the station requested a mass casualty response when several people reportedly requested medical attention while trying to climb the station’s long escalators, which were all out of service. Firefighters and paramedics from Arlington, Alexandria, Fairfax County and Ft. Myer were dispatched to the station, according to emergency radio traffic.

Paramedics reportedly treated at least one person suffering an asthma attack. It’s not clear how many others were treated. Crowds at the station have thinned out since Orange Line trains started running again, according to firefighters on the scene. Most of the emergency response has been put back in service.

Traffic in the Rosslyn area was reported to be at a standstill as emergency vehicles made their way to the station. Virginia State Police was dispatched to the area for a report of pedestrians crossing Route 50 between Rosslyn and Courthouse.