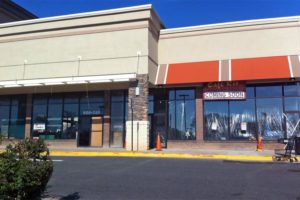 Two new restaurants are coming to the Willston Center in Seven Corners.

A Chick-fil-A restaurant is under construction at 6108 Arlington Boulevard, not far from the Target store that anchors the shopping center. The 3,700 square foot restaurant is expected to open in April 2012, according to the Falls Church News-Press. Like last year’s Chick-fil-A opening in Crystal City, chicken fans can expect the restaurant to give away free food for a year to the first 100 people in line at the store’s opening.

Next to Chick-fil-A is Cafe Rio, which will be the second Northern Virginia outpost of the Utah-based Mexican restaurant chain. Cafe Rio says its restaurants “offer the highest quality, freshest food you will find anywhere.” As proof of the freshness, the company points out that its restaurants do not have freezers or microwaves.

Interior construction at Cafe Rio still appears to be underway. According to a counter on the Cafe Rio web site, the restaurant is expected to open on Wednesday, Nov. 16.

The Willston Center is located just across the Arlington border in Falls Church.