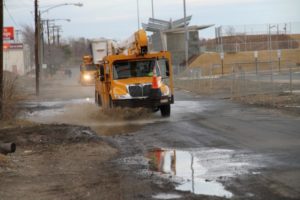 Old Jefferson Davis Highway, which will be officially renamed “Long Bridge Drive” next year, is arguably the worst road in Arlington County.

With deep potholes, large pools of standing water, and no lane markings, the road — which connects Boundary Channel Drive and Crystal Drive/12th Street S. — is not easily traversed by anything smaller than an SUV.

That was less of a problem when the road served primarily as a short cut for adventurous I-395 commuters and Pentagon employees. Since November, however, Old Jefferson Davis Highway has been the sole road leading to the newly-opened, $31 million Long Bridge Park. That has led to some grumbles among park users.

“Old Jefferson Davis Hwy is in SERIOUS need of repaving,” one local resident said in an email to ARLnow.com. “Why would they open a brand new park, but not provide a safe road to get to it or tear down the decrepit buildings next to it?”

The good news is that relief is on the way. According to Arlington’s Department of Parks, Recreation and Cultural Resources (PRCR), a reconstruction project for the road will begin in early-to-mid 2012.

“The reconstruction of Old Jefferson Davis Highway should begin in earnest toward the end of February/early March pending the completion of utility relocation,” said PRCR planner Erik Beach. “The installation of a massive stormwater system will be one of the first steps in rebuilding the road. The final paving will be late summer of 2012.”

The road was originally supposed to have been reconstructed by the time Long Bridge Park opened, according to Beach, but the project was pushed by due to delays in Dominion and Verizon relocating their utility lines.

“The County cannot begin its wet utility work until the dry utilities have been relocated by the utility providers,” Beach said. “Dominion appears to have completed their work and Verizon projecting a late January completion. This places the finished road at the end of August 2012 with landscaping going in in the early fall.”

The finished road — which will by then be called Long Bridge Drive — is expected to include an improved drainage system, two bike lanes, on-street parking, median strips, sidewalks, street trees, pedestrian lighting, curbs and new pavement.