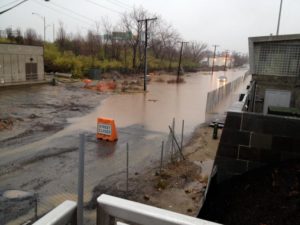 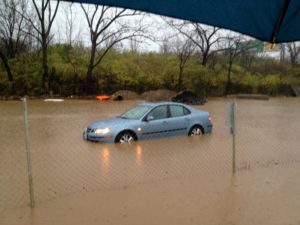 Big potholes aren’t the only hazard on Old Jefferson Davis Highway, which is set for a reconstruction project in 2012.

With rain in the forecast over the next couple of days, it’s worth recounting this scene from two weeks ago. A reader — who we’ll call “Joe” — says he was driving down Old Jefferson Davis Highway, between the Pentagon and Crystal City, in the middle of a rainstorm on Dec. 7. Despite the fact that a couple of cars passed him going in the opposite direction, all of a sudden Joe found himself and his car stranded in high standing water.

“The cars had apparently turned around going the opposite direction, something I should also have done,” Joe lamented. “I entered what I thought was a muddy puddle and quickly came to realize just how dangerous it was.  The car started to choke and it was too late for me to get out.”

Joe said he called 911 and had difficulty getting the dispatcher to understand where “Old Jefferson Davis Highway” was. Eventually, an Arlington police officer showed up and was “very helpful.”

Joe added that there was a “road closed” sign on one end of the street, but not on the end he was traveling on.

“Even I’m not stupid enough to bypass a road closed sign, why was there not one on both sides?” he asked.

County officials expect to start installing a new storm water system along Old Jefferson Davis Highway as soon as February. In April the road will be renamed “Long Bridge Drive” after the adjacent Long Bridge Park.