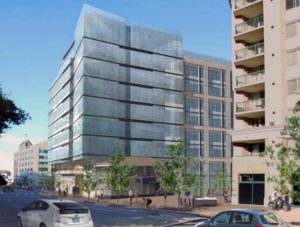 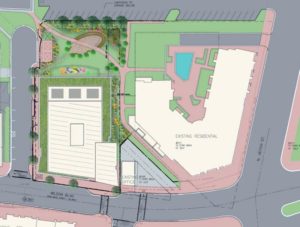 Update at 5:15 p.m. on 2/1/12 — The site plan is no longer expected to come before the County Board in February. It may, however, come before the Board as soon as March or April, according to Leon Vignes of the Arlington County Department of Community Planning, Housing, and Development.

The Arlington County Board is expected to consider a site plan for a new eight-story office building in Courthouse at  an upcoming meeting.

The development — dubbed the “Clean Technology Center” — would be located at 2311 Wilson Boulevard and would replace a pair of two-story buildings that house a number of restaurants, including Thai at Corner, Chez Manelle, Listrani’s, and Adams Corner. A short stretch of dead-end road called N. Custis Street would also be replaced.

Two adjacent structures — a 10-story Archstone apartment building and the two-story “Superstar Tickets” office — would not be affected.

The proposed building would contain 166,380 square feet of office space, 8,660 square feet of ground-level retail space, a 5,000 square foot daycare center (plus a fenced-in, outdoor play area), a 9,432 square feet conference center, and a 1,665 square foot fitness center. The plan also includes a 20,000 square foot parcel of publicly-accessible green space to the north of the site, between the new building and the parking lot for Key Elementary School.

The developer is promising LEED Gold green building certification, including solar panels and a partial green roof. A three level garage below the building would include 264 parking spaces and 150 bike spaces.

So far, there’s no indication as to when demolition of the existing buildings would start should the site plan be approved.

Image below via Google Maps 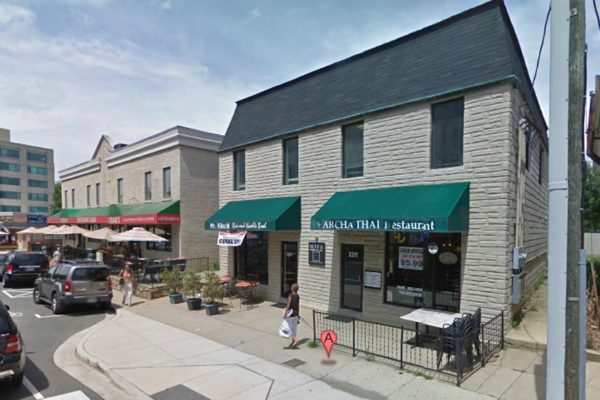