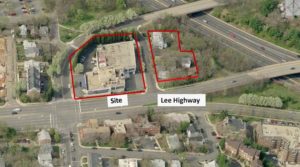 A development proposal being examined by Arlington’s Site Plan Review Committee tonight would build a new apartment tower and a new grocery store on the Bergmann’s Cleaning site on Lee Highway.

The proposed buildings would replace the former Bergmann’s dry cleaning plant, at the corner of Lee Highway and N. Veitch Street, and five early 20th century houses across the street from the plant. The homes are also owned by Bergmann’s.

In place of the houses, which are located between N. Uhle Street and I-66, the developer is proposing a 10-story, 166-unit, LEED Gold-certified apartment building, complete with a fitness center and swimming pool on the penthouse level. The apartment building would have a mostly-glass façade, with white vertical concrete columns.

Planners have expressed reservations about several aspects of the development plan. County staff oppose the grocery store plan, which would require a partial exemption of the allowed retail density for the site. Arlington County has a policy of making exceptions for grocery stores, which are seen as a net positive for the community, but staff notes that density exemptions have only been granted for full-size grocery stories.

Concerns about the height of the apartment building, and the stark transition between the single-story grocery store and the ten-story apartment, have also been raised. Another likely topic of discussion: the fact that all parking for the combined project (226 spaces) will be located in a garage below and on the roof above the grocery store. Apartment tenants will have to walk across N. Uhle Street after parking.

The developer, McCaffrey Interests, is responsible for a number of notable local developments, including Georgetown Centre in D.C. and Market Common Clarendon in Arlington. The company’s Washington office is located in Courthouse.

Following tonight’s Site Plan Review Committee meeting, the project is expected to be considered by the Arlington Planning Commission and County Board no earlier than June 2012.