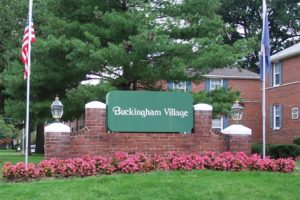 The original plan, as approved in 2009, was to take 48 units of the 140-apartment Buckingham Village 3 affordable housing community and sell them as condos to moderate-income households. Last night, that plan was officially scrapped after the Arlington County Board was told that the condos would be a tough sell.

Buckingham Village 3, a series of 16 low-rise apartment buildings along the 300 block of block of N. George Mason Drive, was purchased by the county for $34.5 million in March 2009 as part of its ongoing effort to increase the supply of committed affordable housing in Arlington.

The initial goal for the community was to renovate the buildings, lease 92 apartments to households earning below 60 percent of Area Median Income (AMI), and sell the remaining 48 units to households making 60 to 80 percent AMI. The condo component was part of a county initiative to increase home ownership among moderate income households. 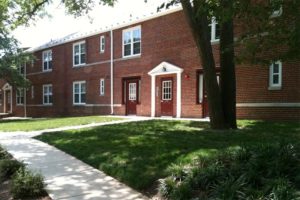 The condo plan, however, eventually became the victim of grim market realities, according to a staff report. As determined by two market studies commissioned at the request of the county, selling the condos to households in the target income range would have required “significant price reductions” due in part to the onerous affordability restrictions that would come with such a purchase. Also hurting sales: the difficulty in securing a mortgage for households in the income range. In the end, the market research suggested it could have taken up to four years to sell all 48 units, with a county subsidy of nearly $230,000 per unit.

Last night, the County Board reluctantly but unanimously voted to keep the 48 would-be condos as committed affordable rental apartments.

“This is not the outcome the Board had hoped for when we set this project in motion in 2009,” County Board Chair Mary Hynes said in a statement. “However, the Board’s action today ensures that these 48 Buckingham 3 units will be preserved as affordable rentals for decades to come.”

The Board also directed staff to find new ways to help lower-income residents to buy a home.

“We also have given staff clear direction to devise a funding strategy to help qualified, low- and moderate-income, first-time vested Buckingham home buyers the chance to buy — either in the Buckingham neighborhood, or elsewhere in Arlington,” Hynes said.