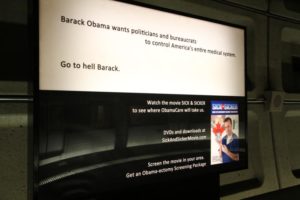 Is the Arlington County Board trying to give itself the power to remove inflammatory political ads from Metro stations? It sure sounds like that may be the case.

Two weeks after the brouhaha over an ad in the Clarendon Metro station that told President Obama to “go to hell,” the County Board went into its closed executive session with a curious objective: to discuss “the county’s authority to regulate the content of advertising on Metro property.”

All we know about the discussion is that quote, read by County Board Chair Mary Hynes before adjourning the Board’s Tuesday afternoon meeting. The executive session is legally considered private and, reached for comment, a county spokesperson said they’ve been advised by the County Attorney to not discuss any details.

Even if the county can find the authority to regulate ads in Arlington Metro stations, though, there remains the question of whether removing political ads would be Constitutional. In explaining why it allowed the inflammatory “go to hell” ad, Metro issued the following statement: “WMATA advertising has been ruled by the courts as a public forum protected by the First Amendment of the Constitution, and we may not decline ads based on their political content.”