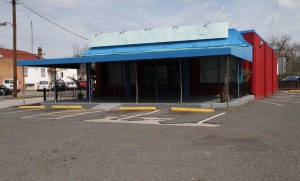 A tipster first noticed that the Latin/Mexican restaurant was closed and its sign had been painted over two weeks ago. As of Thursday afternoon, there was still no activity inside the eatery.

Las Delicias had poor reviews on Yelp — a cumulative average of only 2 out of 5 stars — and was the scene of a violent brawl in January.

Hat tip to Tony B.