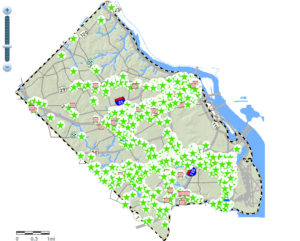 It seems like development projects are always popping up somewhere in Arlington. A new online map highlights all that development, and gives data about each project.

The county’s Planning Research and Analysis Team recently released a report summarizing residential and commercial development activity for the 2011 calendar year. Along with the report, the research team set up an interactive Development Tracking Map to show the locations of projects under construction, completed, demolished or approved by the County Board. Additional information accompanies each entry — some of which date back more than 50 years — and pictures are available for certain locations.

At the end of last year, most of Arlington’s ongoing commercial construction was located along the Rosslyn-Ballston corridor. In fact, according to the report, 90 percent occurred just in Ballston. In regards to ongoing construction of apartment and condo buildings, 43 percent was located in Rosslyn, and 33 percent could be found outside the Metro corridors.

The report shows that the County Board approved three site plans in 2011 for residential and commercial use — Virginia Square Towers, Wakefield Manor in Courthouse and Boeing in Crystal City. That makes 2010 and 2011 the years with the least number of approved projects since 2000.