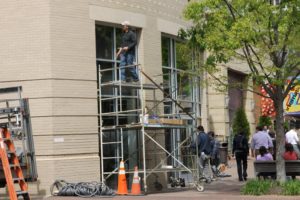 Good Stuff, which is still under construction at 2110 Crystal Drive, will be holding a private VIP opening party on Friday, May 4, complete with a performance by DJ Josh Madden. Madden is a Waldorf, Maryland native and the older brother of Joel and Benji Madden of the band Good Charlotte.

Good Stuff began interviewing prospective managers for the restaurant today, according to Chef Spike’s Twitter feed. The restaurant will be opening at some point in early May, after the opening party, a spokeswoman said. The location will include a 12-seat “farm table” and a large, 60 person capacity party space.

This will be Good Stuff’s second location, after the original eatery at 303 Pennsylvania Avenue SE in D.C. A third location, in Georgetown, is expected to open by the end of this year.