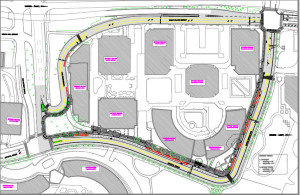 Crystal City’s main drag will be getting a major facelift. A contract has been awarded to convert Crystal Drive from a one way street into a two way street.

During its meeting on Saturday, the County Board voted unanimously to award the $1.9 million contract to Ardent Company, LLC. In addition to the street conversion, the three phase project will improve intersections along Crystal Drive with new traffic signals and ADA compliant ramps and crosswalks. A southbound bicycle lane will also be added.

The new design is expected to make the street safer and easier to navigate, as well as preparing the area for future development and a streetcar.

The county will post notices about periodic lane closures before they happen. The goal is to only close down one lane at a time to minimize the impact to drivers.

Funding for the project was previously approved and appropriated in the Transportation Capital Fund.

END_OF_DOCUMENT_TOKEN_TO_BE_REPLACED

More Stories
‘Roommate of the Year’ Proposes to RoommateCounty Sewer System, Manholes to be Renovated