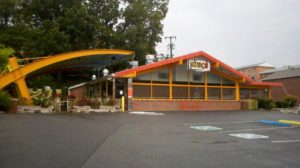 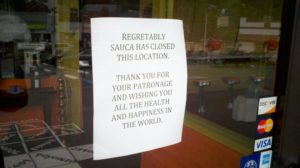 Less than a year after it first opened, Sauca restaurant at 4707 Columbia Pike has apparently closed.

The eatery was shuttered and dark last night, with only a single piece of printer paper in the door to announce its demise. It read: “Regretably [sic] Sauca has closed this location. Thank you for your patronage and wishing you all the health and happiness in the world.”

Sauca was unique in that it took the menu from an existing fleet of food trucks and tried to build a brick-and-mortar restaurant around it. Despite the fact that it added a lush outdoor patio, a liquor license, and happy hour specials to the food-truck-to-restaurant formula, we’re told that Sauca still struggled to attract a consistent customer base to its slightly off-the-beaten-path location.

Sauca is owned by Farhad Assari, a former international investment banker who left a lucrative gig in Dubai to move closer to his family and pursue his culinary dreams. The Sauca Twitter account has not been active since last Tuesday.