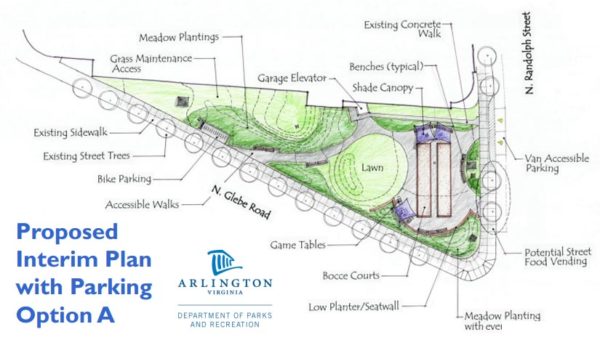 A pair of bocce courts may soon be coming to a small strip of green space near Ballston Common Mall.

Arlington County park planners have proposed a set of improvements to a barren, triangular park at the corner of N. Randolph Street and N. Glebe Road, adjacent to the Ballston public parking garage.

The proposal includes two side-by-side bocce courts, benches, a handicap-accessible walkway, bike parking, meadow plantings and a designated food truck/cart area. The cost of the improvements is estimated at $150,000. The park design is described as temporary, and is intended to be “easily… displaced if a long-term use is identified.”

Park planners met with community members on Tuesday to discuss the proposal. The final design for the park is expected to be firmed up by early summer, with construction beginning in late summer or early fall.