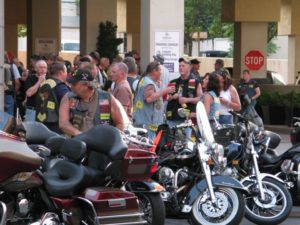 Thousands of bikers will begin to arrive in Arlington tomorrow afternoon for the annual Rolling Thunder motorcycle rally.

Residents who live along I-395 and Route 1 can expect to hear the roar of motorcycle engines tomorrow, May 25, as the bikers head to hotels in Crystal City — including the rally’s official hotel, the Hyatt Regency at 2799 Jefferson Davis Highway — and to a candlelight vigil at the Vietnam Veterans Memorial in D.C.

On Sunday, Rolling Thunder will rumble over to the Pentagon parking lot at 6:45 a.m. for an event that will be followed by a convoy into D.C. at noon. In order to safely accommodate the rally, Arlington County Police will close Washington Boulevard from I-395 to the Memorial Bridge from 8:00 a.m. to 4:00 p.m., according to a press release. During that time, Arlington National Cemetery will only be accessible from southbound George Washington Memorial Parkway or northbound Route 110.

“Motorists should expect large numbers of motorcyclists in Northern Virginia and the entire Washington Metropolitan area this weekend,” the police department advised. In the past, Rolling Thunder has drawn criticism for the amount of noise it generates for those who live along major roadways.