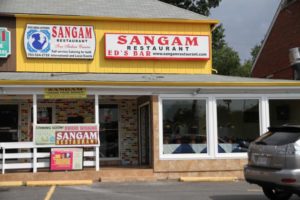 (Updated at 4:45 p.m.) Sangam Restaurant has closed, less than a year after it moved from the Comfort Inn in Ballston to 3205 Columbia Pike.

Owner Edward Dean says financial difficulties forced him to shutter the location. For the time being, Dean says he’s continuing to operate a delivery and catering business, with the same staff as Sangam, out of another Indian restaurant in Arlington. Customers can call 703-524-2728 to place orders, he said.

Dean, a retired diplomat, says he lost more than $1 million trying to make the restaurant work between 2004 and today. While perhaps not a financial success, the restaurant did win some accolades, including three straight first place awards at the Taste of Arlington.

Even though it struggled while on the ground floor of the Comfort Inn, Dean said moving Sangam to its most recent location on Columbia Pike was “the biggest mistake I made.”

Now, Dean says he’s looking for a partner to try to get the restaurant up and running again in another location. If that doesn’t work, Dean said, he may have to abandon his restaurant ambitions altogether.