The Arlington County Board board has approved the replacement of WJLA’s Jumbotron in Rosslyn, but the ultimate fate of the screen and the news ticker around it is uncertain.

While the Board approved a request to replace the screen at 1100 Wilson Boulevard with a more modern, high definition video display, it also voted against a request that 8 percent of the screen space be used for a static commercial sponsorship message.

WJLA and landlord Monday Properties requested a sponsorship logo be allowed in order to help fund the new pricey new screen. The logo would have taken up 8 percent of the screen, while another 15 percent of the screen would have been used for community and cultural messages. As we reported last week, county staff recommended against the sponsorship request, saying it could set a bad precedent. 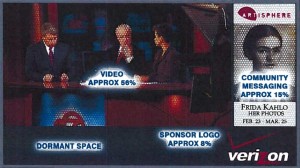 The county zoning ordinance states advertising for goods or services not available on site is forbidden, largely to avoid the proliferation of billboards. Jonathan Puvak, an attorney representing Monday Properties, argued at Saturday’s County Board meeting that thanks to specific restrictions proposed by the applicant, making an exception for the Jumbotron would not create a new precedent and wouldn’t spur billboards. The Board, however, still voted unanimously in favor of the county staff recommendation.

Monday Properties was seeking to replace the eight-year-old screen because it’s no longer capable of displaying the WJLA’s high definition broadcasts. At the moment, it can only display a weather map. Before the vote, Puvak said the Jumbotron may simply be taken down unless the sponsorship aspect was approved.

“Without the sponsorship element, it’s likely that the new screen will not be installed, and both the ticker and the Jumbotron will eventually come down, as they’re no longer maintainable,” Puvak said.