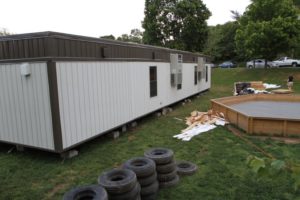 Arlington Public Schools (APS) has agreed to move several relocatable classroom trailers at Jamestown Elementary School. The move comes about a month after residents and parents started loudly complaining about the placement of the trailers.

The relocatable classrooms were originally placed near N. Delaware Street, adjacent to a playground. Several members of the Jamestown PTA wrote a strongly-worded letter to the School Board in response, saying the trailers took up “valuable green space” in a “high traffic area,” were “in direct line of sight of over a dozen homes in the neighborhood,” and “sully the atmosphere of the heart of the Jamestown community.”

Parents also complained about a lack of notice before the trailers were placed on school grounds. Last night parents were notified that, in response to their concerns, the trailers would be moved closer to 38th Street N.

“It’s in the same area, it has just been set back farther,” APS spokesman Frank Bellavia told ARLnow.com. No word yet on whether the decision will fully assuage the PTA members’ concerns.

In a letter to Jamestown principal Kenwyn Schaffner, APS superintendent Dr. Patrick Murphy said the decision was made in response to feedback from the community and from school staff.

In response to your request for additional classroom space to meet the rising enrollment at Jamestown Elementary School, and the subsequent pleas from your community that the placement of the modular units be reviewed, and based on feedback I have received from you and the Facilities & Operations staff, I have accepted the recommendation that the units be placed on the Option B location. That is, the units will be moved from their current site to closer to the gym and 38th Street North.

I appreciate your efforts to manage the crowding conditions and to ensure that student learning is at the forefront of our efforts. I also appreciate your response to community concerns and the suggestions you have put forward.

Please extend to your community my wishes for a positive end to the school year and a restful summer break.