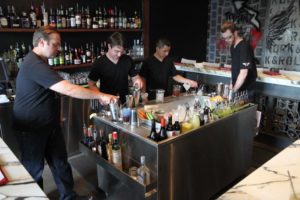 Eamonn’s and TNT Bar (2413 Columbia Pike) quietly opened to the public last night, serving up fish, chips and artisan cocktails to residents who happened to walk by and see signs announcing the otherwise unannounced opening.

The cocktail-bar-slash-restaurant is in its “soft opening” phase and will be open starting at 5:00 p.m. each day this week. The owners are currently anticipating a more formal opening on Friday. At some point, the owners say, Eamonn’s will open for lunch — but for now it’s only open for dinner service and cocktails.

The eatery represents a significant expansion for EatGoodFood Group, which operates Restaurant Eve, Eamonn’s, PX, The Majestic and Virtue Feed and Grain, all in Alexandria. Not only is this the first Arlington restaurant for the company, but it expands on the simple  fish and chips menu of the Old Town Alexandria Eamonn’s with new menu items like burgers, chili, wings, and shepherd’s pie.

The menu, the moderate prices and the space — with its laid-back rock ‘n’ roll motif and sound track (which isn’t too loud) — is meant for casual dining, the owners say.

TNT Bar occupies about one third of the space, in the back of the restaurant. Conceived by famed local mixologist Todd Thrasher — who named the bar after his son, Trystan Noah Thrasher — the bar offers a half dozen original Thrasher cocktail creations, and about a dozen of Thrasher’s favorite cocktails that were created by his bartender friends around the country.

Priced between $6 and $16, the cocktails are made with premium liquor and made-from-scratch mixers and infusions. Thrasher said the ingredients that go into the drinks are expensive, but he tried to keep the prices from reaching too high, even pricing one or two cocktails at a loss for the bar.

To enhance the bar-goer’s experience, Thrasher, who grew up in Arlington near Wakefield High School, went so far as to order a custom-designed “bar stage” which sits behind the bar and allows customers to see their cocktails being made.

Thrasher co-owns the establishment with Cathal and Meshelle Armstrong. Meshelle, who grew up on Seminary Road, says they’re excited to be opening a restaurant on Columbia Pike.

“I think [Columbia Pike] needs a place like this,” Armstrong said. “We ran these streets when we were kids. We love the people in this area, we think it’s up and coming, we just want to be able to provide them with something fun, new and different. I think this neighborhood… can support that.”