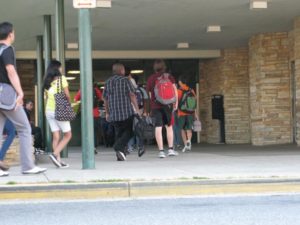 In response to parent concerns about the safety of students walking to school, Arlington County is beefing up the police presence around schools next week.

The County Board directed police to shift more resources to school zones for the first week of school, according to a county press release (below). Police officers, sheriff’s deputies, parking aides and crossing guards will direct traffic around schools starting on the first day of school (Tuesday, Sept. 4). Police will be monitoring 18 additional locations around the county during the first week of school, the county said.

In addition to traffic monitoring and enforcement, the county is conducting a public education campaign — with electronic signs being placed in strategic locations around the county to remind drivers and bicyclists about increased foot traffic on the first day of school.

In a press release, the county noted that between 1,000 and 1,500 additional students are expected to walk to school or catch a ride with parents this school year, in comparison to recent years. Over the summer, Arlington Public Schools implemented a controversial new busing policy that will restrict school bus service to students who live outside designated “walk zones.”

The county issued the following press release about its back-to-school pedestrian safety push.

“With the first day of school upon us, between 1,000 and 1,500 more kids this year will be walking or riding with a parent to school than in recent years. It’s important for each of us to take special care when we see schoolchildren walking in the mornings and afternoons, and to be patient with parents driving their kids to school,” said Arlington County Board Chair Mary Hynes.

“Arlington County Police, at the direction of the Board, will be out to make sure that things go smoothly — putting more crossing guards at intersections, closely monitoring driving behavior near schools, and taking steps to raise driver awareness,” Hynes said.

Police Officers, Sheriffs Deputies, Crossing Guards and Public Service Aides will be directing traffic in and around school zones across the County starting Tuesday, September 4, the first day of school, to assist with an expected increase in traffic. Community members and commuters are reminded to stay alert and to yield to pedestrians at pedestrian crossings and in school zones.

ACPD’s Special Operations Section’s Motor Unit will coordinate additional crossings and monitor major roads and highways near schools as needed. Additional police coverage will be at 18 locations across the County the first week of school, and evaluated for safety. Highway message boards will be placed at key intersections, reminding motorists that a new school year has begun.

The start of the school year coincides with the Virginia Bicyclist and Pedestrian Awareness Week (September 9th through 15th). Special emphasis will be placed during the week on public awareness and enforcement of traffic laws governing how to share the road.

Drivers are reminded to:

Walking students and all pedestrians are reminded to:

Bicyclists are reminded to: