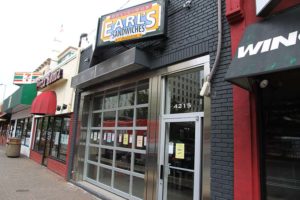 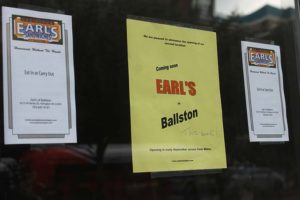 Talk about a quick turnaround. Just days after brgr:shack (4215 Fairfax Drive) closed its doors across the street from the Ballston Metro station, Earl’s Sandwiches is nearly ready to open in the space.

Last month, Earl’s co-owner Steve Dugan told ARLnow.com he hoped the restaurant would be able to open in early September, and a sign posted on the window sports the hand-written note “this week.” Dugan confirms the restaurant should open on Friday or Saturday.

brgr:shack, which won the 2012 Taste of Arlington Best Entree, had been at that location for a little more than a year and a half. Workers can be seen inside working on renovating the burger joint into the new Earl’s.

This will be the second location for Earl’s, which already has a restaurant in the Courthouse/Clarendon area (2605 Wilson Blvd). Dugan said the goal was to expand, but remain nearby.

“We have a following in this area, but we are maxed out in this location and can’t serve any more customers,” Dugan said. “We like Northern Virginia and wanted to stay close by.”

The menu at the Ballston location will be the same as the original Earl’s, with the addition of beer and wine. Initially, the restaurant will only be open during the day, but will eventually add evening hours.