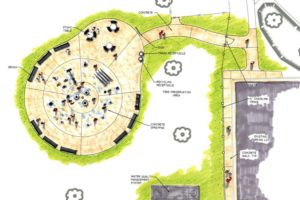 The Arlington County Board on Saturday is expected to vote on contracts for two park projects in south Arlington.

The Board will consider a $573,000 contract to build a new “sprayground” at Virginia Highlands Park, at 1600 S. Hayes Street near Pentagon City. The park was originally scheduled to open this past Memorial Day, but the project has been beset by delays. According to the staff report, the project was finally put out for bid in May, only to have the bids from contractors all came in higher than expected.

The sprayground was redesigned in order to put it within budget. A new water re-circulation system, which should save 113,000 gallons of water per week, was put into place. The sprayground was also reduced in scale, and certain features like a steel fence and a designed rock structure were eliminated.

The Board will vote on whether to award a $521,000 contract contract with a $52,000 contingency to Southern Playground Corporation. 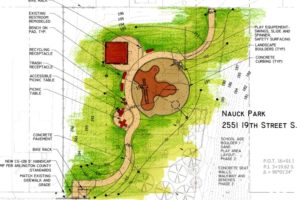 The other contract under consideration is for the tiny 0.6 acre Nauck Park, located at 2551 19th Street S.

Planning for playground upgrades to the park began all the way back in 2004. Construction was finally set to get underway in 2008 — following a plan to enhance amenities at the park while removing an existing restroom — when the Nauck Civic Association request that all work on the project stop, so that the park could be redesigned in a way that would keep the restroom. In order to keep the project within budget, the county scaled down other planned amenities within the park.

On Saturday, the Board is scheduled to consider a $316,000 contract — $287,000 plus a $29,000 contingency — with Avon Corporation. The contract covers renovations to the playground and the bathroom, as well as accessible entrances, an accessible picnic area, benches and bicycle racks.