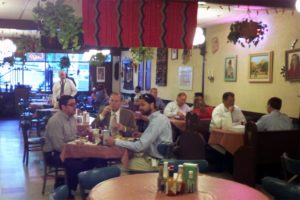 After 24 years in business, Santa Fe Cafe (1500 Wilson Blvd) will be closing its doors.

The restaurant — the longest-running in Rosslyn — will be closing around Oct. 27 (exact date TBA). Owner Kip Laramie said he made the difficult decision to close after finding out his rent was to increase nearly 30 percent should he renew his lease.

“It has been an honor and a privilege to help people have a howling good time at Santa Fe Café for the last 24 years,” said Laramie. “My staff and I have seen Rosslyn develop from a convenient but somewhat sleepy neighborhood into one of the most vibrant places in the country to live, work, play and learn.”

The news comes as Santa Fe Cafe is in the midst of its annual Hatch green chili harvest festival. During the festival, which runs through mid-October, the restaurant serves special dishes made with the famous green chiles from Hatch, New Mexico. The spicy chiles are flown in fresh from a local grower in Hatch, then roasted and peeled.

Over the years, Santa Fe Cafe has served its New Mexico-focused cuisine for a number of notable people and organizations, including the New Mexico State Society, the Congressional Hispanic Caucus, former Governor Bill Richardson, the U.S. Supreme Court and a number of local trade associations and nonprofits. The restaurant has hosted benefits for the Arlington Street People’s Assistance Network and BRAVO.

Laramie, who will turn 60 in March, said he would have liked to run the restaurant for a few more years, before retiring and handing it over to his staff. Now, he said his goal is to make sure his 11 employees — three of whom have been with the restaurant since it opened on May 1, 1988 — find new jobs.

“I’m very fortunate to have this wonderful group that i’ve worked with for so long,” he said. “I’m going to do everything I possibly can to find them an even better job than they had here.”

Laramie said he has had a good relationship with the owner of his building — which is now vacant, after some 1,300 Air Force personnel moved out as a result of BRAC — but the extra rent required to renew the long-standing lease was too much for his small business.

“It was just a decision by the landlord that the space is worth more than I can afford,” he said. “I don’t hold those cards, unfortunately.”

Laramie, a former restaurant broker, said it’s tough for a small, locally-owned restaurant to succeed in a high-rent environment like Rosslyn, but added that he’s not alone.

“I think some of the chains that moved in here are even having a tough time,” he said. Still, Laramie thinks Rosslyn will be an even more attractive place to own a restaurant once a few of the large planned or under-construction new buildings open.

“A couple of years from now, it will be a wonderful place to have a business, with all these buildings that are going up,” he said.