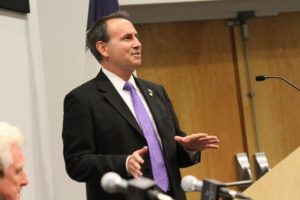 He is more well known, redistricting has cut out Reston from the map and added more conservative areas near Mount Vernon, and he expects the presidential election to help get-out-the-vote efforts.

But from a practical perspective, Murray knows Moran’s more than 20 years of representing Arlington, Alexandria, Falls Church and parts of Fairfax County is not likely to end after Nov. 6.

“I can’t help that. Just because the district is difficult, the cause is the same,” said Murray, the first Republican challenger to take on Moran for a second time since Demaris Miller in 2000. “So many people were just happy to see that somebody was running against this guy for the second time, that I had stuck around. These guys come out of the woodwork, they run once against Moran and then they vanish.”

“He scares them off,” Murray added.

That seems to be a point of pride for Murray, the retired Army colonel who three years ago passed up a chance to attend the prestigious Army War College — which trains future generals — to run for office.

(Murray lived in Alexandria for eight years earlier in his military career, but moved back there in 2009.)

In the 2010 election, he briefly vaulted into the national spotlight when Moran characterized him as a “stealth” candidate without “public service” experience. Murray said it was a criticism of his military career, which he felt was a type of public service. Moran said he was simply pointing out Murray’s lack of local service to Virginia communities.

Once that happened, campaign contributions from 26 states started coming in.

Many of his discussions on issues come back to criticism of his opponent, a strategy he said is intentional and will continue until November. 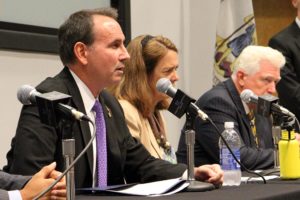 “We’re talking about my opponent because he’s the most hyperpartisan guy in Congress,” said Murray, who at a debate earlier this month openly accused Moran of using his Congressional ties to profit from insider trading. (Moran denied the accusation.)

“My opponent, before he even picks up a phone, he’s got $200,000 or $300,000 in the bank from kickbacks that he gets from sponsoring earmarks,” Murray said as he discussed learning the importance of campaign contributions during the last election.

(In 2010 a report found that Moran received $70,000 in campaign contributions from earmark recipients. To Murray’s claim, the Moran campaign responded: “Our opponent is ill-informed, or worse, he is continuing to knowingly spread false information. It’s poor form but just par for the course from Murray and his campaign. Candidates with nothing substantive to stand on often resort to these types of gutter tactics.”)

Murray’s criticism of Moran also extended to his economic policies.

“He was on TV the other day talking about the strength of our economy and that we’re not broke. He says in our debates Social Security is fine, nothing to see here move along. That’s irresponsible,” Murray said. “That’s what he does. He panders.”

Murray, 53, has never been married and has no kids, something that he said is coming up less this time around.

The Oklahoma City native joined the ROTC during graduate school at Oklahoma State University, then the army “to be a part of something bigger than myself.”

He says he sees himself as right in between their political views. They remain close and don’t talk politics.

“It keeps the peace,” he said.

In a 24-year military career, he served as an Armor commander in Germany during the Cold War and as a Foreign Area Office with Army Intelligence, which included a stint in Sarajevo, Bosnia after the Kosovo Conflict in the late 1990’s.

“We were trying to bring together Serbs and Croats and these were different ethnicities, military units that had been shooting each other, hated each other,” Murray said. “We decided to create a joint military manual. They all speak Serbo-Croation, but Serbs will tell you we speak Serbian. The Croats will tell you no, it’s Croatian. It’s the same language but there’s a lot of different words.

“I mean, Democrats and Republicans are tough but in that situation you really had to work hard to find a win-win situation and I’m always looking for that,” Murray said. “When the Democrats say, ‘We need more revenue,’ I think what they’re really saying is, ‘We want to increase taxes.’ But I would say, ‘Yeah, we do need more revenue and if we can create more revenue by creating more taxpayers and broadening our tax base, what’s wrong with that?'”

After losing in 2010, Murray said he remained involved by going to party meetings, remaining a member of the Alexandria Republican Committee and supporting Republican candidates in local elections there.

He said he hopes his second run will help him make progress with younger Arlington voters.

“It’s not just Arlington, but I think we’re resonating very well with the younger demographic from a common sense perspective,” Murray said. “A lot of them have student loan debt. A lot of them aren’t working. A lot of them are politically savvy in the sense that they’re looking at this $16 trillion debt and they know that it’s their nut.