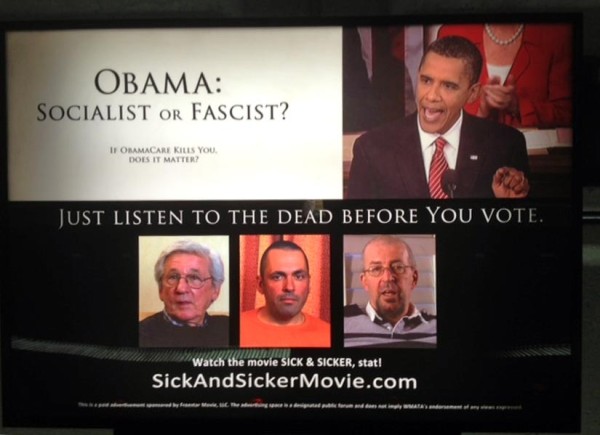 “Obama: Socialist or Fascist?” the ad reads. “Just listen to the dead before you vote.”

The ad is from the maker of a DVD documentary called “Sick and Sicker: When the Government Becomes Your Doctor,” which — as we reported in February — sharply criticizes President Obama’s health care reform law and compares it to publicly-funded health care in Canada.

In a statement previously issued to ARLnow.com, a Metro spokesman said the agency cannot legally refuse ads based on political content.

WMATA advertising has been ruled by the courts as a public forum protected by the First Amendment of the Constitution, and we may not decline ads based on their political content. WMATA does not endorse the advertising on our system, and ads do not reflect the position of the Authority.