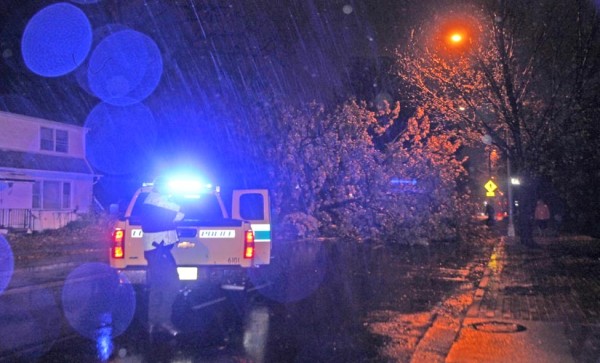 Arlington was “spared the worst of the storm’s impact,” according to county officials, but Sandy and her 60 mph wind gusts knocked down dozens of trees across the county, many of which fell onto roadways and into houses.

As of 8:45 a.m., Arlington County was reporting 22 incidents of trees falling onto or into houses. No injuries were reported and authorities made sure all residents were safe. In fact, there are no known storm-related fatalities or injuries, according to county officials.

About 40 roads were still blocked by downed trees, including Washington Boulevard at N. Utah Street in Ballston, seen above. Crews were working to remove the trees, but some fell across power lines, requiring assistance from Dominion.

Approximately 20 traffic signals are not functioning this morning. All dark intersections should be treated as an all-way stop. 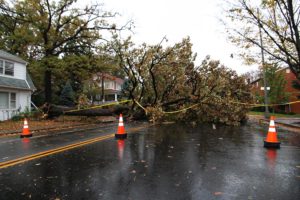 Statewide, from Sunday to 6:00 this morning, Virginia State Police responded to 2,549 traffic crashes and disabled vehicles, and received a total of 4,605 calls for service. At the height of the storm, state police say they were fielding 155 calls for service an hour. VDOT, meanwhile, has lifted HOV restrictions on I-395, I-95, I-66 and the Dulles Toll Road today.

“We continue to urge caution,” the county said. “Conditions remain potentially dangerous outside. Avoid going out onto the roads. Never drive into standing water.”

Those who must travel today will eventually be able to do so via Metro. The transit agency says it will restore limited bus and rail service starting at 2:00 p.m. Trains and buses will operate on a Sunday schedule.

Update at 10:25 a.m. — Arlington Public Schools says a decision about reopening schools on Wednesday will be made “by early this evening.”